I am slow off the mark with this one, but for those Administrators that have been using Lync Server 2013 SEFA Util, you will be pleased to know what a Skype for Business iteration has now been released!

END_OF_DOCUMENT_TOKEN_TO_BE_REPLACED

So as Day 1 Keynote has now taken place, several additional anouncements have been made; with respect to UC, the most significant being the announcement of Office 365 E5 Licensing SKU…

From a recent summary email;

New Office 365 E5 offering: In October, we will introduce a new premium Office 365 enterprise suite. The new E5 plan will include Cloud PBX, analytics, Power BI, and advanced security capabilities, providing partners with a complete productivity and communications offering for their enterprise customers.

Stay tuned for more updates as they come through!

We were teased with the inclusion of an introduction screen in a recent update to Lync 2013 Mobile for Windows Phone, but as of Monday 6th July, version 6.0.1430.0 has been released – Skype for Business for Windows Phone. 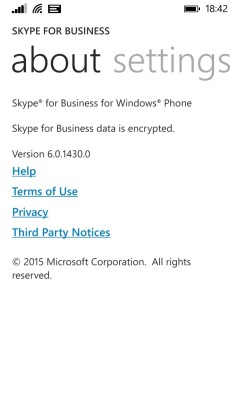 At the moment, it seems to only be available for Windows Phone, with pretty much the same features, with an updated UI as it seems, but I will update if and when I find any differences, also as and when the iOS and Android apps are released – Happy Monday!

I hope everyone is well and enjoying their Skype for Business experiences, today’s post is more of a quick tip as opposed to in depth troubleshooting.

The fix will help you with you when troubleshooting at the component level though!

So a colleague of mine was having issues with Unified Messaging integration (which turned out to be a quick fix with OCSUMUTIL.exe), during the troubleshooting process I suggest he used the CLS logging tool.

END_OF_DOCUMENT_TOKEN_TO_BE_REPLACED

More information can be found here whilst the actual download is here.

Keep an eye out for updates to my previous post, for details on how to apply this update!

During a recent engagement, I had ran into an issue updating the firmware version on Lync Phone Edition Devices.

I initially kicked off with checks around DNS, Certificates, Ports and everything checked out but phones would still not update.

Test Devices had been configured correctly (using serial number and one using MAC) – still no joy.

The IIS logs are extremely useful; Jeff Schertz has excellent blog posts on Configuring LPE for Lync and Updating LPE devices which go into reviewing the IIS logs. In summary, it enables you to confirm whether devices are communicating with the device update site running on within the front-end pool, or in our case – NOT.

END_OF_DOCUMENT_TOKEN_TO_BE_REPLACED

For those that may have not noticed, or have automatic updates configured – Microsoft have released Lync Mobile 5.7.563 to the iOS AppStore.

Unfortunately, release note list “bug fixes”, so not the most information to go on – has anyone noticed any changes?

Hopefully the new Skype for Business Mobile Client will be released sooner rather than later, considering the mobile client is a significant priority, I would have like to have seen its release, alongside side its desktop cousin.

Can anyone confirm Androids current version in the comments below?

Free prize (undecided) for the first person that does!

Thanks Richard for confirming the android version number (5.5.8975) – do you like chocolate? 🙂

MS have released the Skype for Business Server debugging tools 🙂 including

By default these tools are installed inC:Program FilesSkype for Business Server 2015Debugging Tools.

Now please someone correctly if I’m severely behind the times with this one, but whilst having a play around with Lync Mobile running on iOS I noticed a new section appear in my contacts list, added by as well as a notification in the contacts section;

I am easily pleased….

so when contacts add you to their contact list, as does the Desktop client, the mobile client now also provides you with notification. Expanding the group obviously shows you who has added you; END_OF_DOCUMENT_TOKEN_TO_BE_REPLACED

Following on from my previous post, performing an In Place upgrade, I thought I would put together an overview of the simplified pool update process.

The Skype for Business Server management experience has introduced some very useful commands and processes. Firstly, the In-Place upgrade process itself, which introduced you to the Smart Setup and the Start-CsPool command, all which on their own reduce the operational loads significantly!

In this post, I will walk you through the simplified process of performing maintenance on your Skype for Business Enterprise Edition Front End Servers.

Now to summarise the overall process, I will let these two images do all the talking, on the left is the Lync Server 2013 Patching Process, on the right the same for Skype for Business Server 2015

END_OF_DOCUMENT_TOKEN_TO_BE_REPLACED

My thoughts in an interconnected UC world

Here to connect, collaborate and help you!

All things Microsoft including a lot of Teams Office 365 , M365, Skype for Business, Lync and Exchange Blog